Posted by Donna in France, Travel

Recommended Listening: My Body by Young The Giant

It began with a birdsong alarm at 4:45 am. I was anxious, stressed and nervous about making my way from Residence Château du Mée, to the local train station, which I had been warned was often surrounded by local “youths.” It was still dark. I looked in the mirror at my gaunt pale face and knew there was something I had to do about my reflection. Although make-up would not solve what I was seeing, only sleep and deep relaxation would iron the wrinkles from under my eyes and lighten my darkened eye sockets. I felt like death, afraid and lonely but due to my nature, giving up was not an option, I could only push forward. I collected my bags which I’d packed the previous night, after checking once, twice and thrice, I left my apartment and began the cold, dark walk to the train station under the amber night lights. My heart was beating fast, you might say I was having palpitations as I approached the station, hoping that I would make it alive. I made it to the platform, on time. I took a moment to gather my thoughts and snap a selfie for my husband. I needed to propel myself forward; a desire to prove to myself that I could complete the task ahead of me gave me the courage to continue.

Once aboard the train, I relaxed for a little while, deep breaths kept me occupied until the changeover at Gare du Nord. Next stop, Charles de Gaulle aéroport. Thankfully the stations are laid out in a sensible manner, no extra intelligence required when navigating the underground channels and stairways. When I finally arrived within eye-site of my boarding gate at Charles de Gaulle, I felt an overwhelming sensation of success and achievement. It had been a 2.5 hour, 70km journey on half a nights sleep with a panic attack seemingly imminent. I had made it. I wouldn’t be returning to class with stories of missing my flight to Montpellier, or having to cry down the phone to my husband about how I had failed and felt incapable of carrying out adult responsibilities. Today I was a success story.

I felt good about leaving Paris temporarily, not that I haven’t enjoyed my time in Paris, but there are small niggling things about being a tourist in Paris, that I wont go into now. I was looking forward to exploring more of France, more than my apartment at the residence, more than the dining hall in the prison. Sitting on the plane, I felt free at last. Excited to explore but still anxious. Why? I’m glad you asked… you see, during a more confident moment of my life, I had booked a manual transmission hire car in Montpellier. Sitting at home in the comfort of my bed I performed some mental calculations and decided that I was smart enough and dexterous enough to handle multiple behavioural changes at once whilst operating a moving vehicle. At arrival in Montpellier, I decided not that I was wrong, but that I didn’t need to use my intellect at capacity this weekend. Why would I create extra stress for myself in what I was promising would be a relaxing weekend. So politely I exclaimed, “1 Automatic vehicle, and left hand drive road network please.” They met only 1 of my demands. 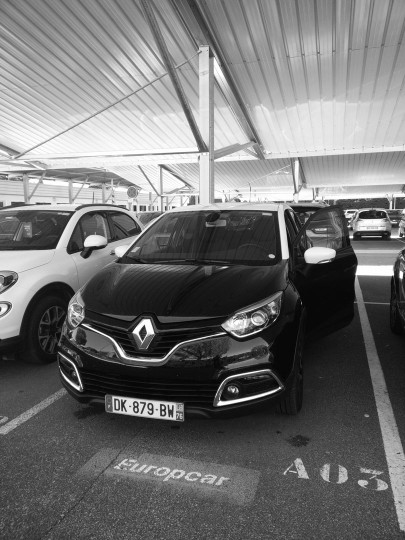 I spent the next 10 hours with a cute little Renault Captur, she was my companion. It was already 11 am and I had castles to see and castles wait for no-one. So it was time I hit the road. I had 4 castles on my to do list that day, but I wasn’t in the mood for abiding to limits imposed by a Donna from prior time zone. So I decided on my first destination and nothing more. Driving in France was a pretty cool experience as a first timer, although expensive. The roads are heavily tolled, forcing payment at the exits. My little Renault had a good stereo which I used to capacity, soaking up as much French radio as I could in the 2 hour drive to castle land; I’d promised a friend that he’d receive some French music links over the next month, so I had work to do. It took me a while to get up to speed with everyone else on the road.

After a few good upbeat songs and some traffic observation from the slow lane I was ready to put the foot down. 130 km/h here we come. The people in this area weren’t familiar with indicators, so I immersed myself in the French culture and pretended my vehicle didn’t have indicators either**. I made it to my destination without a scratch. Again, I proved myself to be a success today. The journey was charming to say the least. After paying my tolls I started on the roads less travelled, I laced my way through windy mountainous roads alongside endless vineyards and freshwater streams. It was picture perfect. I yearned to share this with my partner in crime and in life, my Husband. It was exciting, Multiple times without warning, a small village appeared as if it had risen from the ground beneath me and I’d be rewarded with quaint villages with narrow streets and romantic architecture. There were a couple of tunnels carved through the mountains that lead me to my destination.

Google maps describes this Château as, “castle ruins with a tower on a high rock.” *Clap Clap* Well done Google.

Although accurate, Château de Quéribus is much more than that. It is located approximately 190 KM south of Montpellier, strategically positioned like an eagles nest with 360 degree panoramic views of the entire Roussillon plain, from the Mediterranean sea to the Pyrénées mountains. First mentioned in 1020, the castle of Quéribus was part of the County of Besalù, then of Barcelona and was finally held as a royal fortress by the house of Aragon in 1162 and continued to be a home for the Cathar people of Europe until they surrendered without a fight to the French in 1255. The castle then became an important part of the French defence system for the next 400 odd years. However it’s strategic position became less important in 1659 when King Louis XIV signed the Pyrénées Treaty which drew up the new borders between France and Spain.

As you can see from the pictures, the view was amazing. I spent a good length of time atop the castle, imagining my rule as queen and enjoying the view. Most importantly I practised something my darling sister taught me, “breath in the good shit, breath out the bullshit.” This was exactly what I needed to set myself up for an enjoyable weekend. After I grew tired of playing queen, you could say I ran down the castle stairs to get in my car, eager to have another experience, and boy what an experience followed…