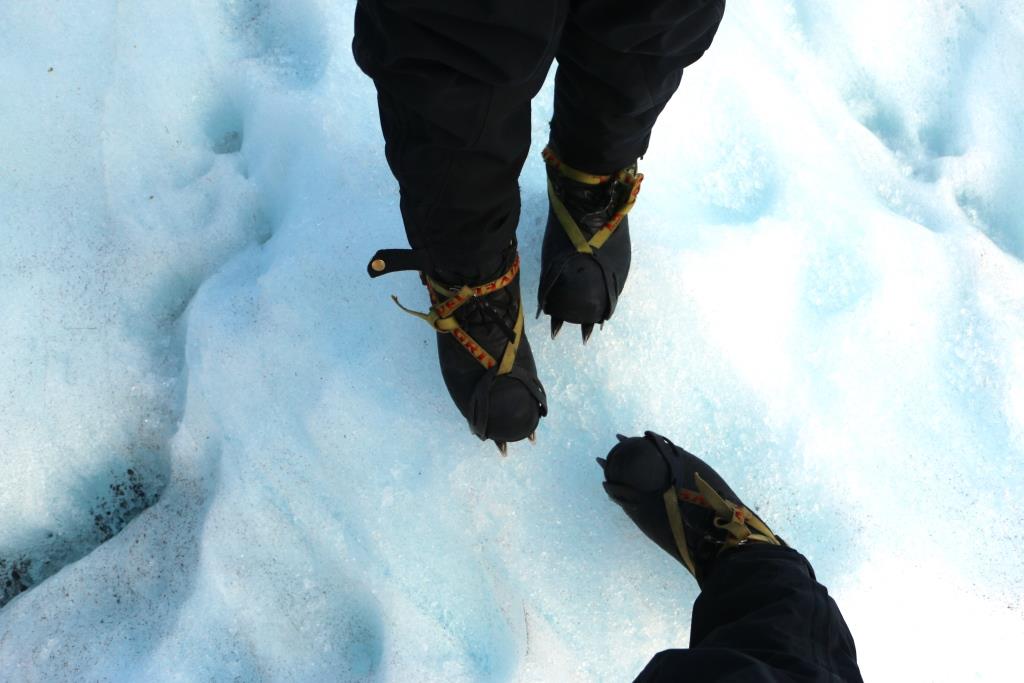 Posted by Donna in New Zealand

Franz Josef is a small town, that probably wouldn’t exist if it wasn’t for the big moving river of ice, also known as Franz Josef Glacier. The glacier brings thousands of people each year to this tiny town to enjoy what the region has to offer. We started out with the quad bikes as I posted earlier. The next day we took a helicopter ride so we could witness first hand the enormity and beauty of the glacier.

We were treated to the most amazing view as the helicopter pilot took us face to face with a waterfall upon the cliff face. You could nearly taste the freshly melted snow.  He then piloted us to our destination and gave us a soft landing on the hard ice of Franz Josef Glacier. We slipped and slid our way on the ice to meet our tour guides. We were eager to try on our crampons so we could safely explore the ice.

Our tour guide was an American fella with a passion for the glaciers. He carefully showed us how to tie on our crampons and how to walk in them safely. The glacier may not have done any harm to us, but we were told to get angry with the ice. You dig your feet in nice and hard into the ice to get a good grip. Mark and I didn’t have any problems with this and it actually felt quite natural. (Not the angry part… just the physics of walking in Crampons.)

You always keep your feet parallel in crampons as it’s easy to hook a spike from one foot to the laces of the other. Unfortunately one of the older guests on the tour walked down a step sideways and his foot hooked his laces and he quickly “became one with the ice” in what I’d say was quite an emotional experience for him. I can only imagine in that split second before connecting spiritually with the solid ice that he was wondering how hard he’d have to hit the ice in order to cause an avalanche. He was a bit shaken up afterwards but I believe all was well with his person and it was only his ego which was hurt.

Mark and I avoided all injuries and dangerous avalanches. Although we witnessed two avalanches high on the ice above us. Yes we were directly in the path of destruction but the dominoes of ice stopped well above where we were walking. It’s ok though – our tour guide prepared us for this situation earlier in his safety briefing. It went something like “If I start running… You run.”

The sound the avalanches made was like nothing I have heard before and it is a sound that hits you head on. It resonates through every muscle and bone in your body and out the rear end. Certain words were created for moments like that. Consternation being one that comes to mind. We looked up to witness fresh breaks in the glacier, with large boulders of ice crashing into the ground, crushing everything underneath it.

We spent just over 2 hours on the ice and got some great pictures to prove it. Hope you enjoy them. If you’re ever near a glacier in the future I would highly recommend taking the opportunity to walk on top of one, be in the midst of one and in some cases, you can even get underneath one. 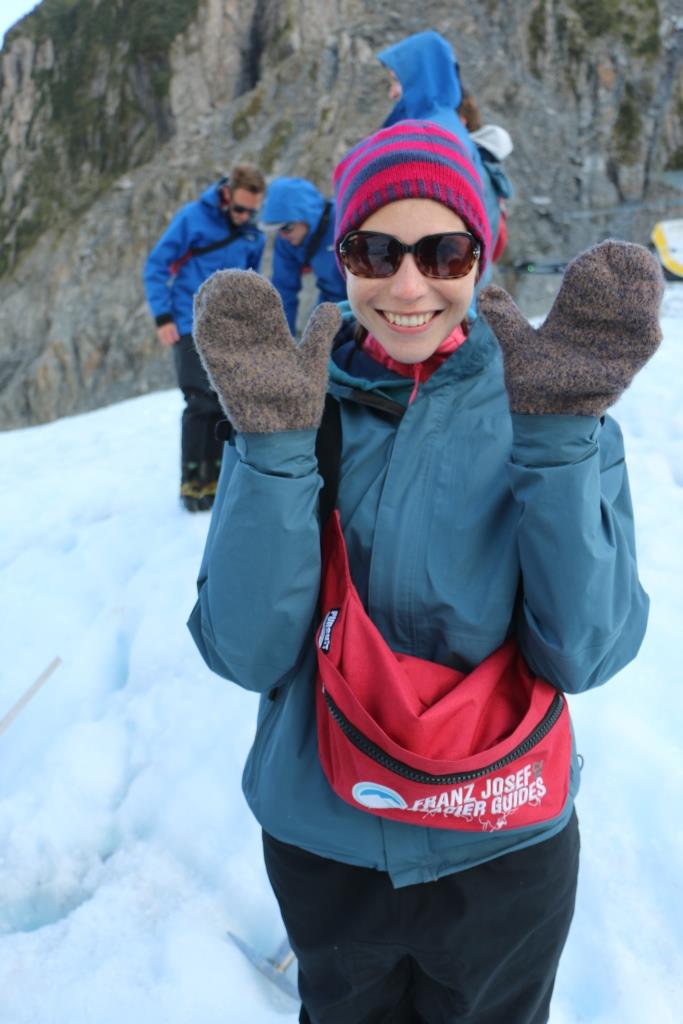 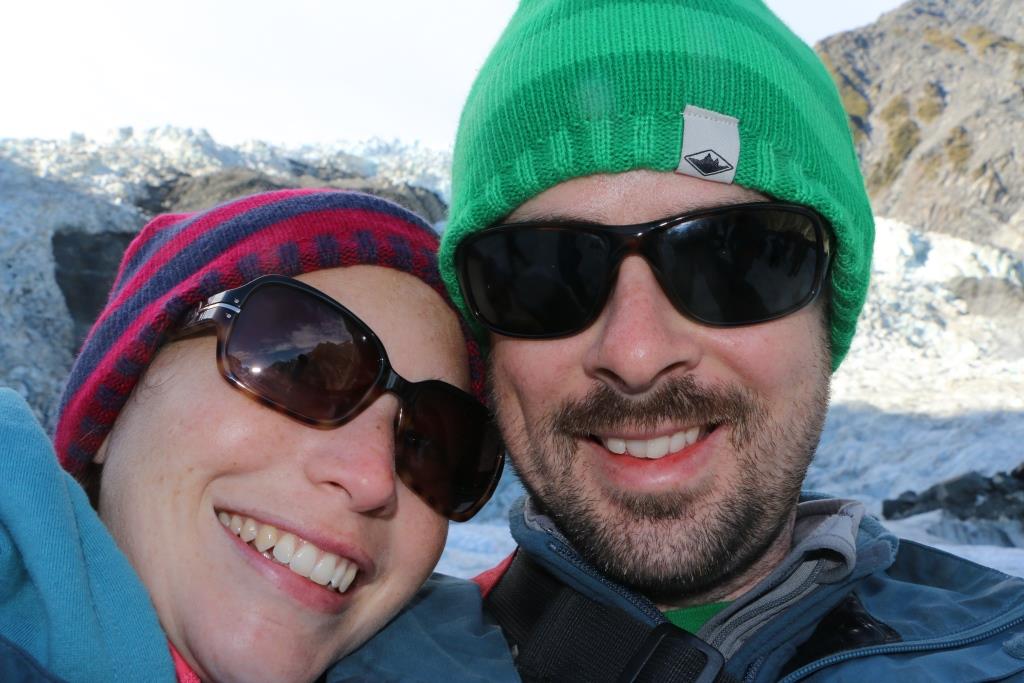 Selfie on the Glacier 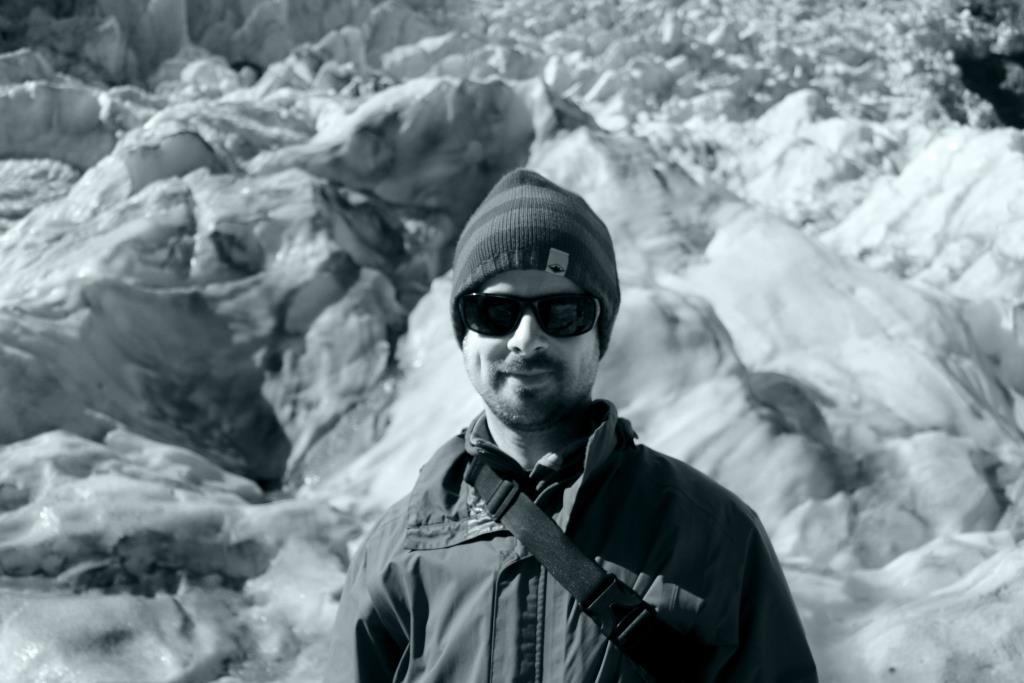 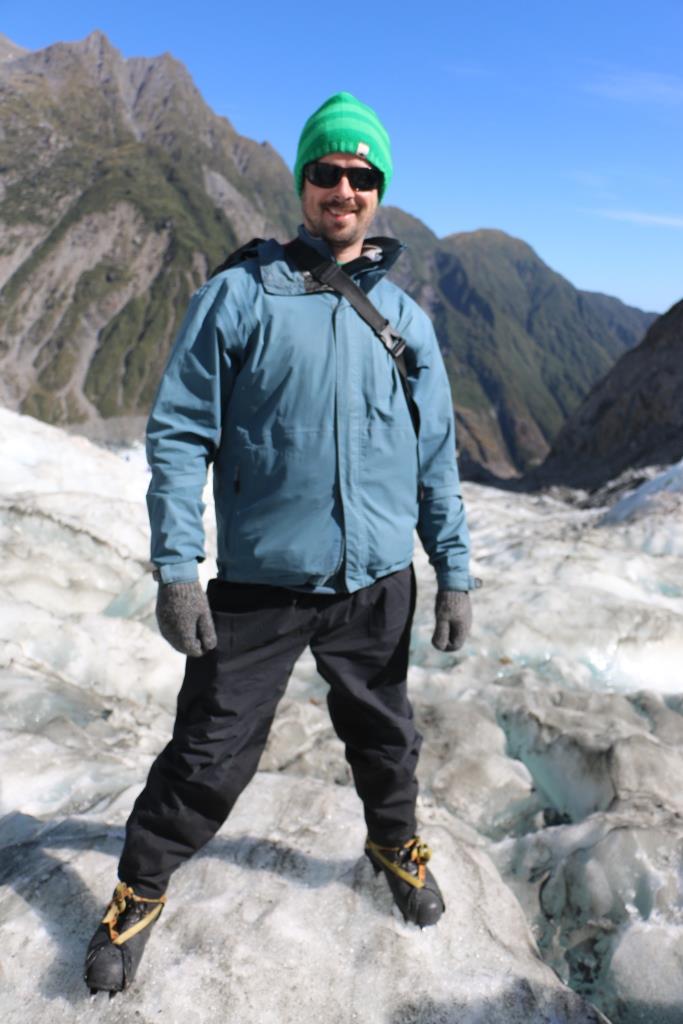 Enjoying a cool seat on the ice. 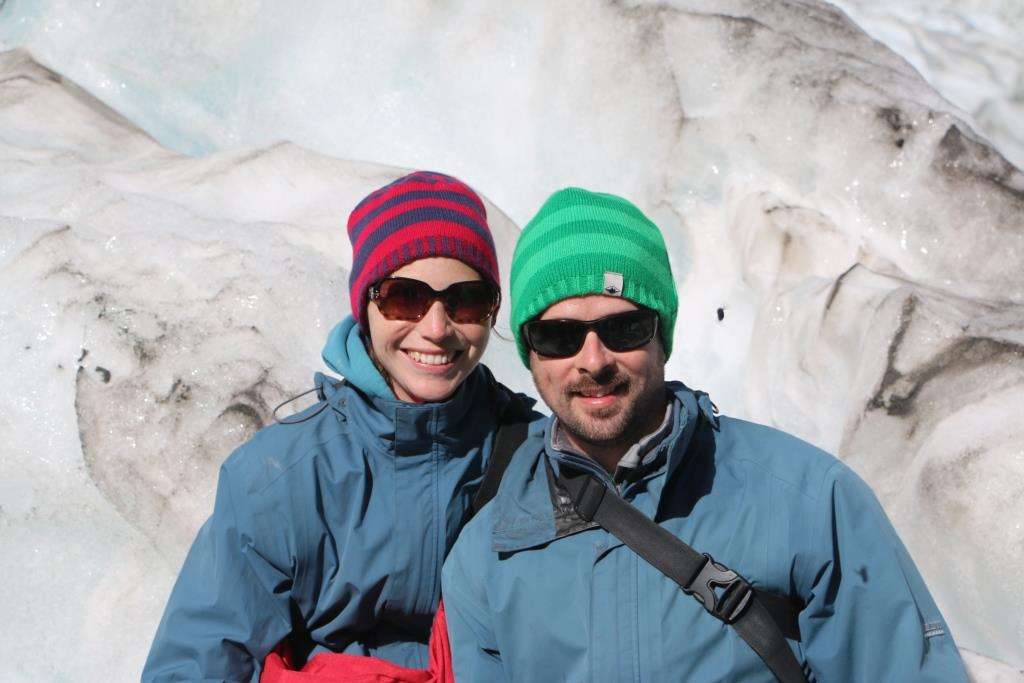 Just to prove we were both there together. 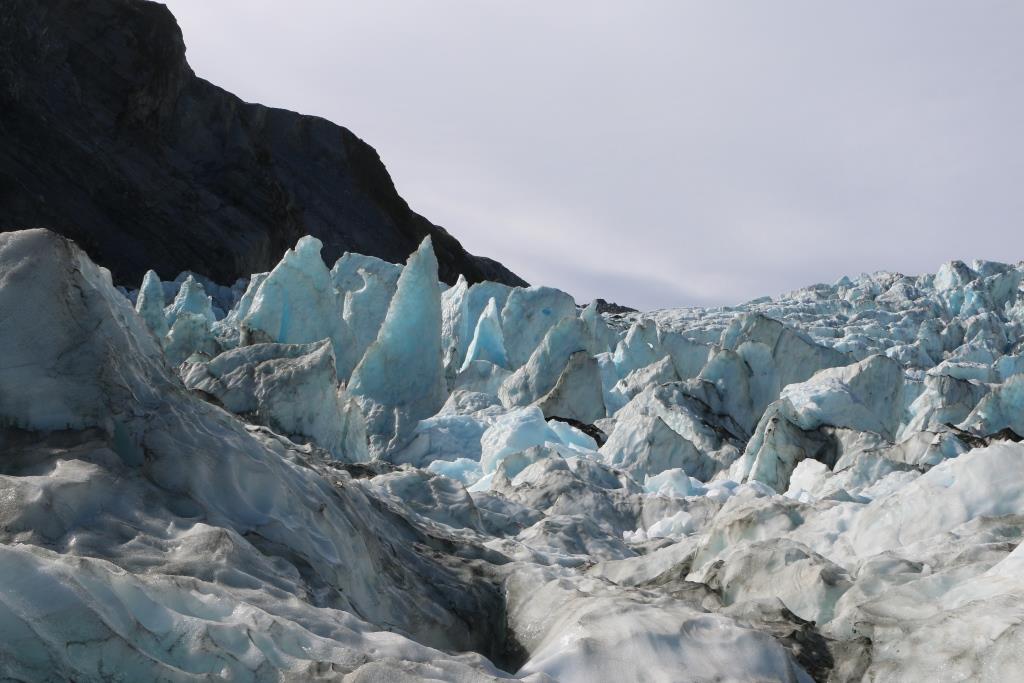 Photo’s cannot convey scale, just believe me when I say those peaks are much much bigger than they look. 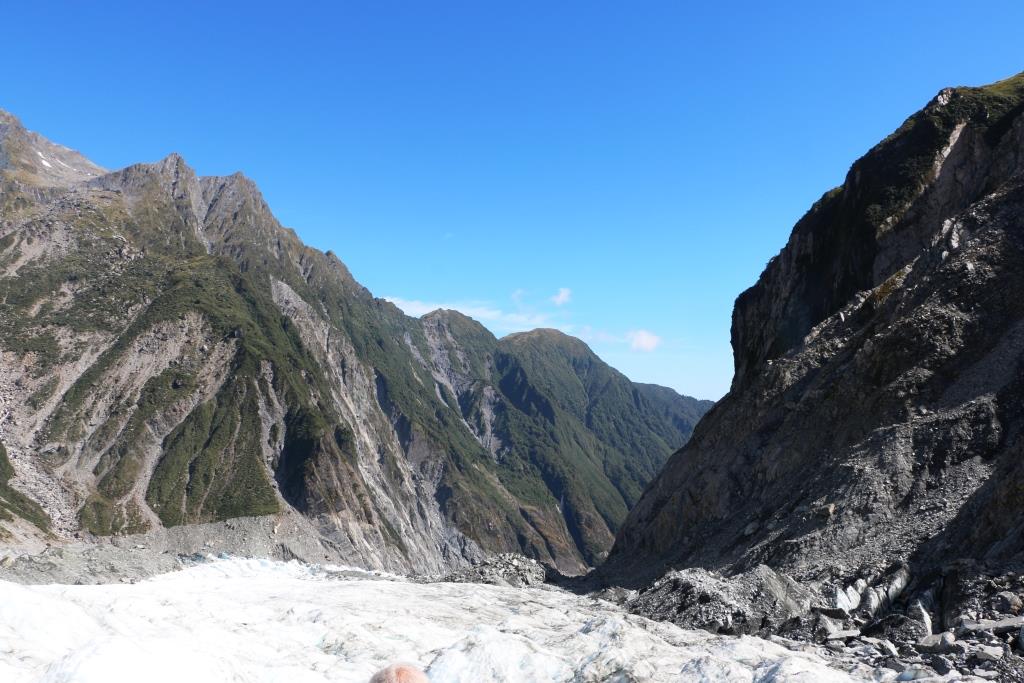 Looking back down the Glacier into the valley 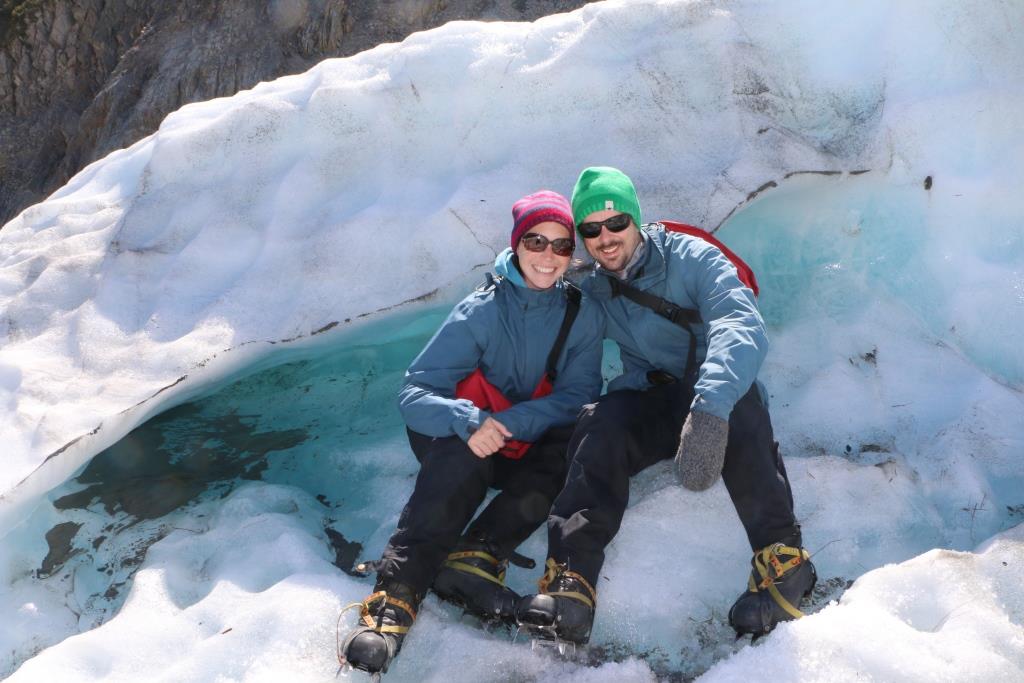 Mark next to a glacier stream.

(*No old people were harmed on the glacier tour)